There are over 10,000 problems to play!
This is a free Sudoku app for beginners to advanced Sudoku players.
As long as you have this Sudoku app, you can enjoy Sudoku for free, anytime, anywhere!
A wide range of problems from beginner to expert level problems.
You can feel as if you were actually solving them with a pen and paper.
We’ve made a lot of improvements to make it easy for you to solve Sudoku puzzles.
The same questions are rarely asked.
With instructions and instructions on how to solve Sudoku!

Features
Solve the daily updated problems in the Dilly Challenge!
The Dilly Challenge is graded on the amount of time you complete it and the time you solve it.
Have fun with Sudoku every day!
About HintsIf you get lost for a number in a problem, use the hints.
You can use the notes to write down the numbers that might fit in the squares.
If the same number is in a cell, the color of the overlapping numbers will change.
There is also a function that allows you to change the appearance of the numbers freely.

In Jigsaw Sudoku, the rule is that instead of a square frame, an irregularly shaped frame is used.
Jigsaw Sudoku is a fun puzzle based on a grid of four to nine squares, allowing you to choose the difficulty level you prefer.

What is Sudoku?
Sudoku is a classic puzzle logic game that is very popular.
Nowadays, it has become one of the simple classic puzzle games that are popular all over the world.
You can enjoy it as a way to pass the time and brain training.
Sudoku is also called Sudoku.

Sudoku explanation
There are several ways to solve Sudoku puzzles in this page, and tips and tricks are provided along with diagrams to help you understand how to use them.
Expert-level Sudoku puzzles can be solved in this course, so you will need to know how to solve these difficult puzzles!
Learn how to attack Sudoku and play it crisply.

Daily challenge
Solve a different problem each day.
The less time you take to finish a problem, the more stars you’ll earn.
Collect as many stars as you can and climb to the top of the ranking.

Random conditions
You can play a question with different conditions every day.
The conditions, such as time limits and note usage limits, are automatically updated each day.
If a puzzle is difficult, you can try again after some time has passed.

Updated content
New input modes and more number of appearance changes you can make.
You can change the settings to enter Roman and Chinese numbers as well as Arabic numerals.
More questions to play!
We’ve got the Achieve feature!
Ranking of the number of problems solved for each difficulty level.
Restricted input mode for normal problems.
Added coin function, now you can see hints.
Added jigsaw Sudoku!
– Fixed some bugs 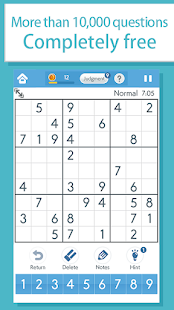 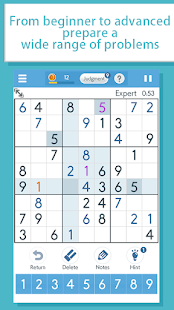 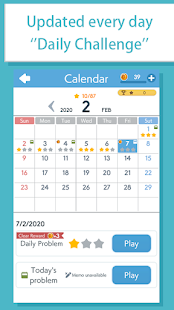 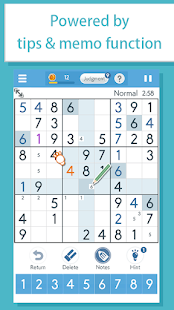 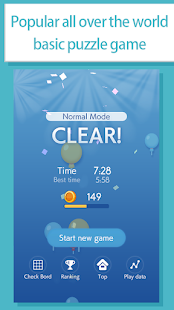